August is blueberry picking time in Connecticut. This post looks back on a trip with my 2-year-old son, Will, to pick berries and take a hayride.

The heatwave in New England has subsided. After day after day of intolerable heat, it was cool yesterday (while it rained) and warm today. Thank goodness. The stifling heat is just too much for this pregnant woman to take.

Fortunately, today also happened to be the day that Virtual Frolic and I had planned to go blueberry picking with Will. It wasn’t overwhelmingly hot. And while we did get quite toasty in the sun, we lasted about an hour before wanting to head back.

Actually, the heatwave probably worked to our advantage in that respect – there were tons, and I mean TONS, of beautiful, big ripe blueberries on the bushes at Jones Family Farms in Shelton.

It’s definitely a good time to go blueberry picking. Be aware that they are closed on Sundays and Mondays though. The season is also coming to a close soon, so call before you go to verify hours and that they are open.

Will had a blast from the time we arrived. (Did you notice that I color code his clothes to the fruit? Yea, it’s deliberate . . . he’s just a little boy after all and it saves us from unnecessary clothing changes due to fruit stains.) And, being the big two-year-old he is, he carried our basket for quite a bit.

But there is nothing as cute as his squeal of “weee!” when we rode on the Berry Ferry out to the field and then back later. He ate quite a few berries and was kind enough to pick a few too. And, miracle of miracles, the ones he picked were mostly ripe.

VF and I have had a ton of fun doing the pick-your-own circuit this summer. Strawberry picking in June, blueberries in August . . . and maybe, just maybe, we’ll head off for peach and other fruit picking in the fall. 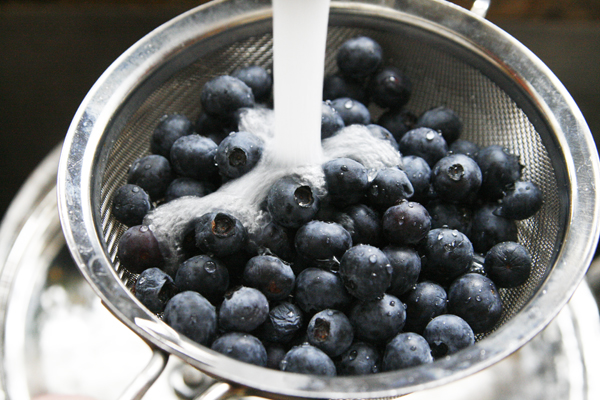 Next
How to Freeze Blueberries
0shares
Click here to cancel reply.

Will is too cute for words, as usual.