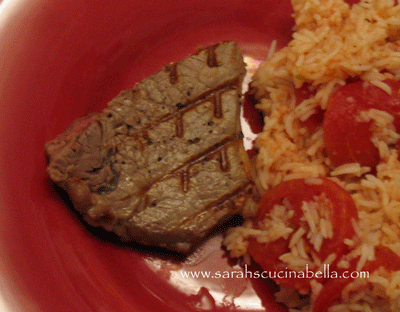 My husband loves a good steak. I think if he had his way, we’d be eating steak every single night. In fact, we did eat steak every night for a bit early on in our courtship.

But, let’s face it, good steaks are a little pricey to have often. And when you have kids to diaper, a house to maintain and two dogs who demand their daily doses of kibble … well, steak falls pretty low on the totem pole. That’s why I immediately bookmarked this post at Jaden’s Steamy Kitchen. I had to try the technique she suggests. 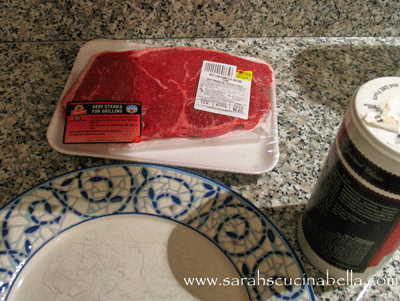 So, I started out with a decent cut of beef (it was a sirloin) and my handy dandy container of kosher salt. (Lord, I think I’ve been watching too much Blue’s Clues …) 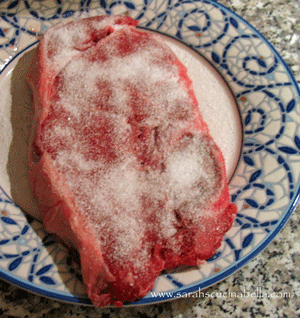 I slathered the salt on both sides of the meat — really thick. And then I walked away for an hour. What happened? 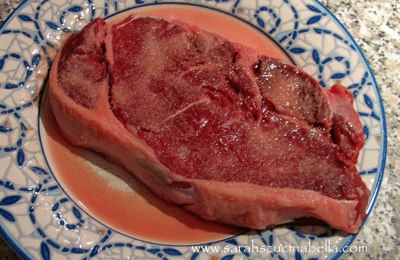 Just like Jaden said, the meat began to sweat. So, I washed away the salt and patted the meat as dry as I could get it. Then I lightly seasoned it with pepper and threw it on the grill. The George Foreman Grill

, that is. It is winter here in Connecticut after all. What? You think I should be using my propane grill? Are you nuts? Too cold to cook outside. ‘Nuff said.

Anyway, onto the grill it went.

Absolutely delicious. The salt imparts a great flavor into the meat. However, neither Shawn nor I are certain that it made the meat any more tender. We’ll be using this in conjunction with an idea we have for how to break down the meat a little more and make it butter soft . . . But regardless it’s still a technique we’ll be doing again for the flavor.