“I have a culinary boner right now.” – Andrew

Let’s get the very worst of it over with: Dale’s outburst at the end of the (surprisingly fun to watch) Quick Fire could quite possibly be the most pathetic moment of this Top Chef season. That’s saying a lot with this group. Was his tantrum really necessary? Yes, it stinks to lose. No, you aren’t entitled to whine about it. It seemed less like a chef and more like a spoiled boy in need of growing up. The only thing worse was the whole Marcel hair shaving thing during season 2.

But, moving on. The Elimination Challenge split the chefs into two teams and pitted them against each other catering a wedding. Adding to the drama: the chefs had to work through the night and serve in the afternoon the next day . . . nice.

Did you catch that Andrew shuts up when he is lacking sleep? He should lack sleep more often . . . though his sound bites this episode were a trip (see above).

Shining moment for the episode? Richard giving up the winner spot to Stephanie for all her work on the cake. He’s really shown some strong character in the past few episodes. He’s the guy to beat, for sure, and the guy to know . . .

I wasn’t sorry to see Nikki go. The criticism of her — that she dropped the ball being the “Italian chef” — was completely valid. Too bad they couldn’t send Spike with her . . . 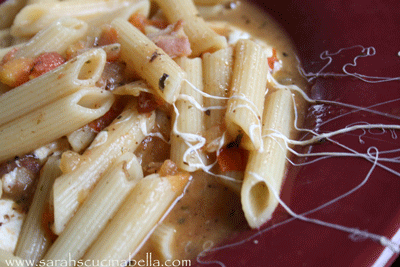 are you going to post about tonight's (may 14) episode?

if you go to my website and go to the blog, I am about to post my own thoughts of the episode

Austin, I agree that Richard will go all the way to the final and think Dale has the potential to -- despite his poor behavior.

Spike, though? I am still not sure he has the talent.

The thing that could hurt Spike and Dale is that the last few challenges often involve team activity -- and their attitudes could impact that in a bad way.

Dale's a little bitch, but he knows what he's doing and I think he'll go far.

I have a strong feeling Richard will make it all the way to the final if not win the entire thing.

Actually the only thing I would have to disgree on, even though he's really annoying and he's not liked by almost everybody left, Spike definitely has some skill. I've noticed that the only time he's been at Judge's table was usually on a team challenge and it was mainly because of what the other people did or didn't do. Ok, except for the spring roll he did with Manuel, he equally deserved to go home on that, but he didn't. I'm not sure how far he'll go.