That salad was my reward for this week.

See, this was one of those weeks. Surely, you know the ones. It jolted to a  start at a breakneck speed first thing on Monday. After a relaxing weekend running errands and hanging out with my cousins, I realized I had some work due early-ish on Monday. I frantically worked to meet a 12 p.m. deadline on this extra project. Frantically. And that is how the whole week felt – just frantic. I got everything done on time every day, but the pace just didn’t stop. I wrote and wrote and wrote, but I never really felt at rest. I just couldn’t turn off the feeling of rushing.

Then today rolled around … and I do mean rolled. I woke up late, after accidentally hitting the off button on the alarm at 6 a.m. instead of snooze. So, off to another breakneck morning, I went and went and went until just before noon when I raised my head from my agenda and realized … I was pretty much done. A few follow up calls later (actually I took a break and then made the calls), it was mid-afternoon and I was free.

Then I just started writing. Yes, I finished writing, just to write a little more. You do realize I am a writer, right? Actually, it made sense. I channeled my peaceful feeling into a little get-ahead work. I sent out a few pitches to magazines and then drafted an essay that still needs a lot of work. But that first draft? Getting it on paper felt so, so good.

So this salad was the reward for a week well worked. Sometimes it’s the simplest things that are the best rewards . . .

It’s very simple — a nice piece of wild Alaskan tuna that was rubbed with equal parts kosher salt and fresh pepper browned for about two minutes on each side (I like it medium-rare). I cut the tuna into chunks, toss it on a bed of baby greens (with a few carrots and sunflower seeds) and drizzled it with Sesame Soy dressing from Trader Joe’s. Easy peasy. 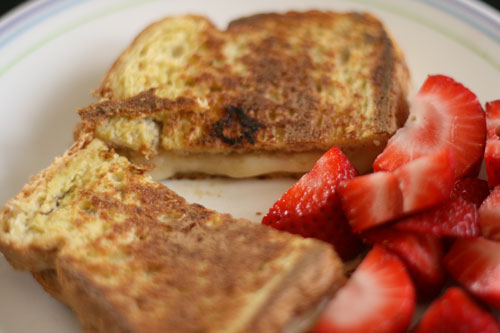 Next
An Extra-Special Oatmeal: Apple-Style
Click here to cancel reply.

[…] ago, I discovered the joys of a perfectly seared tuna steak. It’s grilled quickly in a very hot pan until the outside is browned and the inside is a warm […]

Candelaria, so true. That salad and soup sound fantastic.

Stacey, I found it at our local grocery store (small chain). It was a lucky find -- and on sale at the time! So funny on the last name. My husband's family is from upper New England. Have any relatives up there?

Sarah, I swear, I made a salad with chicken for lunch this week (for next week's post) with the same Trader Joe's sesame dressing, and I never use bottled dressing! It was excellent! Where can I buy Alaskan wild tuna???? not here in New Jersey for sure.

I had two friends over to watch the #1 Ladies Detective Series movies and I made a butternut squash soup and a simple salad with lettuce, english cuke, onions, carrot shaving, tomatoes and italian tuna. That and bread. Simple, delicious, quick instead of my usual more elaborate "company" fare. Here's to simplicity.

It is totally about the simple things - salad looks great!