This week, I was featured on MomTrends as part of the site’s Fit Mom series. When I received the email from Nicole Feliciano, who writes MomTrends, that my profile was up, I was a little giddy. Not only did Nicole say some nice things, but it was an amazing feeling to show off my successful efforts to shed my weight from marriage and two pregnancies. You can check it out here.

I’ve lost about 12 pounds since just before Thanksgiving. I feel better, I look better and I have more energy. Lately, I have conquered some serious vendetta goals. For instance, I’ve been running lately as part of my workout. Last week, I ran for a whole 11 minutes. It might not seem like much to most people, but to someone who has never been able to run due to breathing issues, it’s huge.

But here’s the thing: being a healthy mom and getting fit isn’t easy. Heck, it’s hard. There’s always temptations – the cupcake at a kid’s birthday party, the on-the-run lunch, the kid’s leftovers. And there is always reason to slip up: being too tired, feeling weak, being stressed out. So to be fit and healthy takes a good deal of constant effort. You have to be vigilant and make conscious choices to do the right thing.

You also have to recognize that sometimes you will slip up … like I did recently. My efforts to exercise have lagged, my calorie counting has waned. I’ve been stressed over money (who isn’t these days?) and I have been letting it impact how I treat my body.

Whenever you slip up, you have a choice: do you let it set you back and allow yourself to compound the problem or do you woman up and get back on track? I am getting back on track. I’ve made a commitment to be a healthy mom who is a healthy weight and who has healthy habits. It’s not just for me — it’s for Will and Paige too. They need to see how important it is to live an active, healthy lifestyle.

I just have to do this.

(Psst! The food will be back on Monday and I have some great interviews lined up for the next few weeks to feature on Fridays. You’re going to love it!)

Did you make a resolution to lose weight or be healthier this year? How is it going so far? 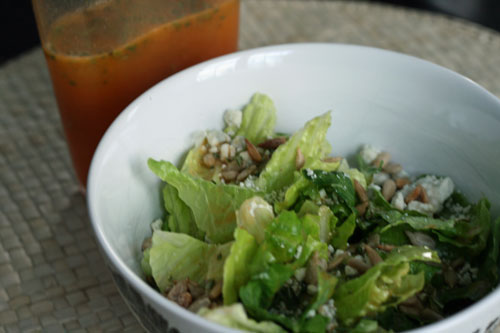 Hey Sarah, This is Wanda from The Teacher Cooks. Thanks so much for volunteering your time and effort to work with me as a new blogger. I cannot wait. I am eager to hear from you. Again thanks. Wanda

You lost 12 pounds DURING THE HOLIDAYS?!?! Impressive!

Wow 12 pounds that is amazing. I'm so thrilled you took part in this series. The moms involved are truly inspirational. .-= Nicole Feliciano´s last blog ..The Great Toilet Paper Debate =-.