(Psst! There is some definite cuteness at the end of this post. Be sure to click though.)

It’s hard to believe that it’s been three weeks already. As you probably remember, the first week of my spending diet was really hard but the second week was a little easier. So, how did the third week go?

First, a quick recap of what my spending diet is all about:

The Plan: No spending from Saturday until the following Saturday. Cash in wallet can only be used in a true emergency.

What Happened: In a lot of ways, I feel like I hit my stride with controlling spending this week. The urge to shop just wasn’t there, and more importantly, the thought of not spending didn’t consume me all week. That was a huge win.

In terms of planning, I’ve come a long way. Pretty much everything was taken care of this week … and there was even enough room for a little flexibility when I decided against a third day of Asian-inspired foods (the turkey burgers had to wait). So, that was good.

Spending: The only spending I did this week was for a magazine subscription that was part of a gift (which I think was A-ok) and a quickie lunch for the kids yesterday (which was paid for by cash that I had on hand). It was a beautiful day and they deserved the treat. Today, I will need to run out for white eggs and milk. The eggs are for dying tomorrow and the milk is because Paige drank way more than expected this week.  Our week’s shopping will happen tomorrow as planned.

About My Saturday Shop: Doing all the shopping for the family for the week in just a few hours isn’t just challenging, it’s really tiring too. Actually, if I am going to be really specific, it’s exhausting. Last week, all I wanted to do after shopping was sleep (which, of course, I couldn’t actually do).

But I still prefer the exhaustion of that to having to hit different stores several times a week without ever really getting everything we need. The organization of a one-a-week shop is really, really appealing.

Unfortunately, although I anticipated last week’s shop to cost a lot less than the previous week, that wasn’t what happened. I did spend less — though not by much. That was both shocking and disappointing. And while I understand why that was, I still want my overall weekly spending to decrease a lot.

What’s Next: This week, despite needing to factor in Easter brunch, I am going to start working on cutting our spending. It won’t be easy though since there is only so much you can cut back on necessities. However, the rewards for spending less are really great – who would say no to more money in pocket?

So, how will I save? I am going to consult the sale ads before making my weekly menu to see what I can purchase on sale. Additionally, I am going to try using coupons again. Since I don’t get a weekly paper, I ordered coupons from The Coupon Clippers for items that I know we will need in the next month or so. (That’s key: only order coupons that you know for sure you will use … I have learned that from experience.)

Do you have any tips or tricks for spending less? Share! I really want to hear them

Have a great weekend! 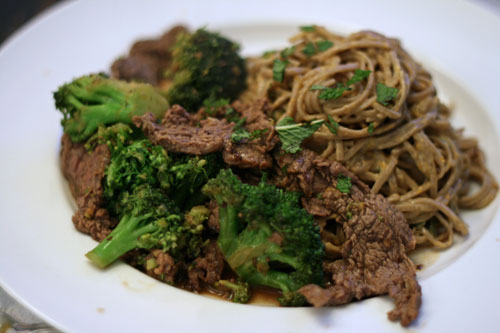 Previous
Thoughts on Cooking from Magazines
Next
Meal Plan for the Week of April 5
Click here to cancel reply.

I might have one tip for you for spending less: Based on the weekplans you posted it looks like you eat meat or fish on a almost daily basis. This stuff is really expensive, though. What about vegetarian cuisine? I know that good vegetables aren't cheap either, but still less expensive than meat and fish.

You're such an inspiration. I'm a terrible spender and really need to examine what makes me want to buy things. This spending diet is something I should look into. Your kids are so cute! .-= [email protected] Baby Steps´s last blog ..Recovery Products for Cosmetic Procedures =-.

You are doing such a good job! I have to do my shopping today, too! .-= The Teacher Cooks´s last blog ..Ultimate Comfort Food – Tuna and Shells – another classroom activity =-.

they are sooo adorable!

I know what you mean - I hit the grocery stores around 6:00 a.m. on Saturday mornings to avoid the crowds, and I get groceries for the entire week. It's still exhausting, but quicker and much more pleasant than having to jostle with others during the day - and then I'm golden until the next Saturday. :) .-= carmen´s last blog ..Tuesdays with Dorie – Coconut Tea Cake =-.