Originally published on EdibleTV.net on January 23, 2009.

Guy Fieri has an infectious laugh. When he belts one out, it’s as if you can hear the sincerity and love of what he does coming through it. More than just the spikey-haired star of several Food Network shows, Fieri is a thoughtful chef with a family and a desire to spread the food love.

Food Network’s Ultimate Recipe Showdown returned for its second season on January 4, with Fieri hosting again. The show brings together cooks from all over the country to compete in six categories (Comfort Food, Burgers, Cakes, Hot and Spicy, Desserts, or Hometown Favorites) for the top prize — $25,000 each episode. For the winning recipes, there is also the chance to have their recipe featured at T.G.I. Friday’s restaurants.  The participants were chosen from more than 12,000 recipe entries by the Food Network test kitchens.

I recently had the opportunity to talk to Fieri about the new season. This season is a bit different than last season, which was the show’s first. The show has been honed to eliminate elements that they didn’t like as much and add more depth.

“This second season is really remarkable – a real in-depth view. Food isn’t just about what is on the plate; it’s about where it came from, who put it there, etc. I think it’s going to be a much more compelling, background driven piece. I think people can really … connect to it because it’s there. It’s all American,” Fieri said.

In terms of the T.G.I. Friday’s interpretations of the dishes, Fieri said that he’s really pleased with what’s coming to Friday’s from this upcoming season.

“I was just down in Dallas at Friday’s headquarters – the chefs at Friday’s I really have to say do a fantastic job. These guys know what they are doing. There is a real big difference with what you can prepare at home and what you will taste at a (chain restaurant) … I was really happy to see that they stuck to the foundation of the food,” Fieri said.

Fieri, who rose to stardom after winning The Next Food Network Star, says that the key to looking comfortable in front of the camera, something that he’s mastered, is not to worry about how you look. And he takes his fame in stride.

“It’s kind of trippy. I’ve been in the restaurant business my whole life so I have always been a little out there as it is … [but not] on a national level. It’s a little trippy. I don’t understand how the big stars handle it, especially with the paparazzi, but it is well worth the opportunity to know what an impact I make on their lives … for whatever trepidations I do have are far outweigh the negatives,” Fieri said. 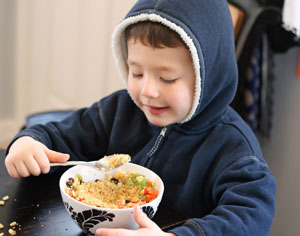 Previous
Cooking with Kids: Make Your Own Couscous
Next
Tyler Florence Says Secret to Getting Kids to Eat Well is Letting Them Help
0shares
Click here to cancel reply.