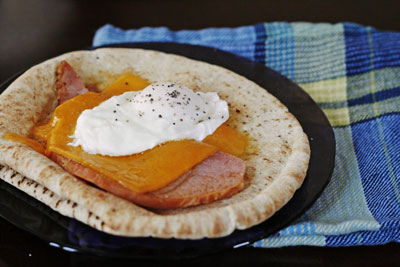 When I order a breakfast sandwich, I want it to be messy. Back when I worked for a big publisher, the chef who did breakfast in the office cafeteria would always crack the egg yolk with the side of his spatula when cooking my ham, egg and cheese. It drove me bonkers. I like the yolk runny so that it bursts into your mouth, perhaps leaving a little drip on your chin (pass the napkin, please!). Finally, I just asked one day if there was a reason he did that — was it a safety issue? Nope, just that most people don’t like their yolks dripping out of the sandwich.

So after that, I learned to remind him never to break my yolk. About 50 percent of the time he’d remember when he started cooking seconds later. Eh, 50 percent is better than nothing.

As I was making this sandwich this morning, I couldn’t help but think how it was a little messy. The threat of errant water from the egg … the runny yolk. Yep. Messy. And I like it that way.

MutantSuperModel - Poaching is super easy. I always end up breaking the egg yolk when I try to do sunny side up or over easy, so I started just poaching instead. Very tasty too.

I'm with you, messy egg all the way. Nothing better than having it drop through my fingers as I'm eating it.