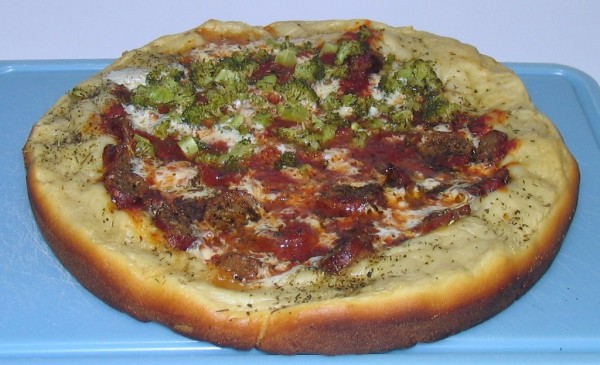 I was having a craving for deep dish pizza last week and decided to try making it at home. I’ve made thin crust pizza dough a few times before by hand, but have never made deep dish or used my Breadman to create the dough. I decided to do both this time. Using the Breadman made the process so much easier.

This dough works well in a deep dish pizza stone or pan. It’s also cook in a countertop pizza oven, if you own one. We used to — but when it died we didn’t replace it.

If you decide to do this, then be sure to allow enough time to make the dough and let it rise twice. The kneading and first rising in the Breadman took about 1 1/2 hours. The second rising was another 30 minutes. Plus it takes 20-30 minutes to cook. Obviously, this isn’t a quick dinner.

Anyway, I like the taste of homemade dough better than the stuff you can pick up in your local supermarket deli or bakery. But then, I like most things I create myself at home. It’s just a me thing.

With a deep dish pizza, according to The Best Pizza Is Made at Home (A Nitty Gritty Cookbook) by Donna Rathmell German “Layer ingredients in this order: cheese, meats, sauce, vegetables and seasonings. Leave a 1/2-inch border around the rim of the pizza.”

This recipe comes from that reliable but out of print cookbook. Fortunately you can still snag used copies on Amazon.

[…] now 9-years-old and is still a pizza fanatic. From deep dish pizza to breakfast pizza and everything in between, Will loves it all. And it wasn’t a big surprise […]

[…] pizza crust from scratch. I have two go-to recipes –one for a perfect thin crust and a flaky deep dish pizza crust. But this time, I went for speed, using a premade dough from my local grocery store. It’s a […]

[…] I’d use store-bought dough. Other times I would make my own — using my recipe for deep dish pizza dough or a different one for a thinner […]

Thanks Sarah W.!!! That is great to hear. This is still my go-to recipe for deep dish too. I have tried others, but this is the best by far. I am so glad that it's working well for you too.

I've used your pizza dough recipe many times now and every time it comes out amazing! Thanks for the fantastic recipe!!!