New potatoes are combined with rosemary, paprika and more and then baked to golden tenderness in this easy recipe for Rosemary Paprika Roasted Potatoes.

Driving through Connecticut after dark during a trip last year, the sky ahead remained illuminated against the blackness. It was nighttime and yet the sky remained bright. It would be hours before true blackness set in — if it did at all.

I used to think that was just how it was. Seeing stars in the night sky was something for the clearest summer nights at summer camp when you stayed up past your bedtime. You couldn’t just walk into your backyard and look up at the cosmos.

Maine has shown me different. The stars are almost always there when darkness sets in, a patchwork of bright and light dots that’s there until dawn sets in. There are so many stars that you can stare for hours, and still not see them all. Some are bright and easy to find. But others are so faint that they only appear when you’ve been looking up for awhile.

The stars have always been there, even when we don’t see them.

It’s so powerful to gaze up into the star-filled sky. Science tells us that we’re seeing history when those little pinpricks of light reach our eyes — some of those stars are so far that we’re seeing them as they were thousands and thousands of years ago. We are but a speck in the greater astronomical landscape.

Here on Earth, whether we’re in an area with light pollution or out where the stars are so bright, there’s another magical, humbling thing that happens. Together with our sun, the soil and oxygen and rainwater combine to create the right conditions to grow food, like these potatoes that came from a farm with a stand at the farmers’ market my kids and I go to.

This year, we’re hearing, won’t be a great growing year for Maine potato farmers though. Drought in the state means that the tubers aren’t expected to grow large — a disappointment for the farmers who depend on the success of this important crop. There’s still time though. Good rainfall this month could turn that around.

In the meantime, new potatoes are available and delicious. Should you have some, this easy recipe is perfect for enjoying them. It’s simple, humble food that goes with just about anything. 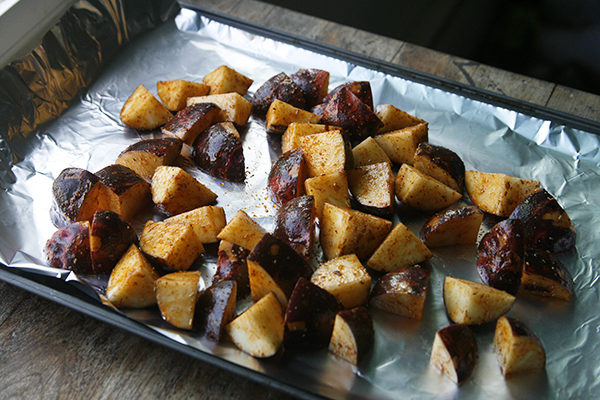 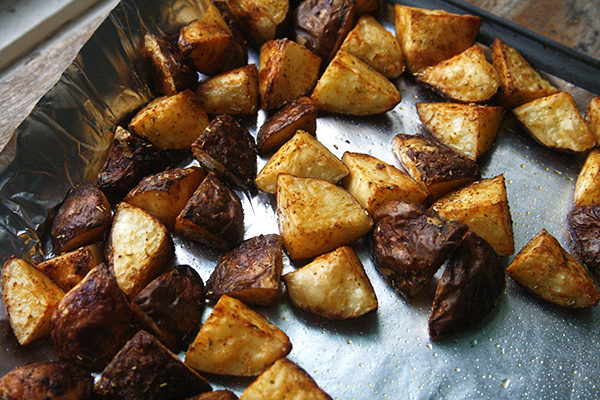 The potatoes are roasted until they are golden at the edges and tender. And then they’re ready to enjoy.

And maybe after you do, take a minute. Consider the food and how it grows. Consider the cosmos. And take in how miraculous this world is.

potatoes always strike me as a comforty winter food. But new potatoes are so "springy". Crazy how versatile one item can be.