This Pumpkin Chocolate Chip Bread recipe yields a moist loaf with a crisp crust. Dotted throughout with chocolate chips and brimming with pumpkin flavor, it’s a favorite.

When my son, Will, started middle school a few years back, I was so nervous. I’d never attended middle school myself so I had no idea what to expect. Would he be ok? Would we survive those years? I only knew the horror stories of bullying, bad choices and raging puberty. The word “worry” doesn’t even begin to encompass what I felt that first year.

(To be clear, I did attend school in grades 6 through 8, but it was the same small parochial school that I attended for much of elementary school.)

He’s now in eighth grade, and although it’s clear that he and his friends are indeed hitting puberty in all its smelly, voice changing glory, it’s been a good experience overall. Will dove into studies and has excelled year after year. He found his tribe, so to speak, in the cross country and track teams as well as a board game club he belongs to in the winter.

His group of friends, the same group he’s hung out with for the last few years, even has a special name for themselves. But that’s theirs, not mine, to share.

My daughter, Paige, started middle school earlier this year and I was decidedly more relaxed about it. Perhaps even zen. Open house and orientation were fun times to show her the school. Choosing school supplies and preparing backpacks wasn’t a worry (well, except when we ended up with one binder that was too small). And sending her off to school was okay – for me. I knew where she was going and how things operated there.

But for Paige, the preparation and anticipation was a worrisome time. She knew it would be different from elementary school and that her friends probably wouldn’t be in her classes this year because of the clustering method of sixth grade classes the school uses. But once she started school, she discovered the joys of lunchtimes spent together. She’s made friends in her classes and joined clubs. And she’s found ways to see (and support) her friends, even though they don’t have classes together. It’s all okay.

Middle school is an adjustment. It comes with so much change and more responsibility for kids. And for parents, it’s a middle point – a time when we have to let go a little so that our kids can grow up. Unlike elementary school, we aren’t welcomed into the school as classroom helpers or called on for during-school events. It’s a time of letting go, at least a little, so kids can mature. They need to be responsible for their actions and attentive to their responsibilities. They need to learn to manage their workload and time. And while, as parents, we must be here to provide guidance, we also need to give them the freedom to fail too – otherwise, how will they learn? It’s taking a step back, in a sense.

For the kids, middle school also means they are presented with more choice then they’ve had before. They can choose what clubs they attend or don’t attend on a given day. They can go to the library after school and check out books, if they want. And at lunchtime, they aren’t limited to the meal being served as that day’s lunch. In our school at least, kids can purchase snacks, sides, drinks and main dishes all separately (or a la carte, as they call it).

The a la carte ordering is beloved among middle schoolers here. Paige and her friends are crazy for it, as Will and his friends were before them. And in particular, Pumpkin Chocolate Chip Bread has become a quick favorite among the sixth-grade girls.

I can’t blame them. Pumpkin bread is good. And pumpkin chocolate chip bread is excellent.

But why should the middle schoolers have all the tasty fun? Knowing how this bread has become adored, I wanted to make it at home. It’s my small way of forging a new connection with my kids’ school day.

My recipe for Pumpkin Chocolate Chip Bread is easy to make at home, but you do need about an hour and a half to make it.

Butter and sugar are creamed together and then mixed with an egg and pumpkin puree.

Flour, baking powder, salt, cinnamon and nutmeg are sifted together and then added to the butter mixture. 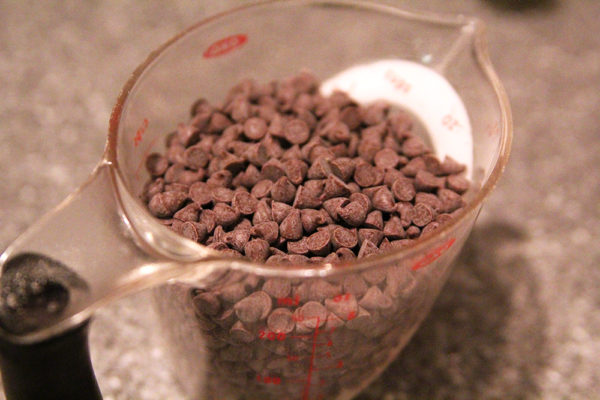 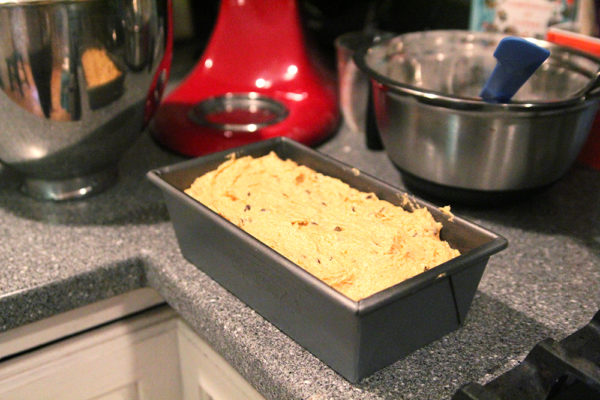 A little milk makes the batter spreadable and mini chocolate chips are swirled in. The mini chips mean that there is chocolate in every bite, evenly dispersed throughout the bread.

And then it’s baked. The lower temperature — 350 degrees Fahrenheit — over a slightly longer time allows the crust to develop a crisp outside while the crumb is light and moist. Use a knife inserted in the center to see if it’s cooked through.

Once it’s out of the oven, let it cool. I prefer to cut it once it’s completely cooled, but you could do it while it’s still a little warm if you want.

And then enjoy with whomever else you know loves pumpkin chocolate chip bread. Things like this are meant to be shared, just as my kids share bits of their school day in conversations at home.

[…] learned early that if he did forget, the sooner he told me the better — for both of us. And when my daughter, as a sixth-grader, forgot her laptop for the first time, Will took it to school with him to make sure she […]