Got pumpkin puree? Cinnamon Swirl Pumpkin Coffee Cake uses one cup of pumpkin puree to make a tender, fragrant coffee cake with a sweet cinnamon layer. This is the breakfast you didn’t know you were missing.

There’s something magical about the combination of cinnamon and sugar. On toast, it’s transformative, turning regular bread and butter into a sweet treat. On snickerdoodle cookies, it sets them apart, creating a crunchy, sweet outer layer. And in this coffee cake, a hearty sprinkling if cinnamon sugar between layers of batter yields a decadent swirl throughout. It’s delicious, delightful and delovely.

Cinnamon and sugar — the simplest of combinations — can be transformative.

It’s not unlike how simple gestures of kindness like a smile or a kind word can impact other people. There are plenty of bigger kind gestures — like paying for someone’s coffee unexpectedly, volunteering with organizations that help people or driving a neighbor to an appointment. Those are wonderful. But the simplest, everyday kindnesses are transformative. They remind us that there’s good in the world. They fill us with warmth. They bring positivity to our days.

As a parent, teaching children to be kind is imperative. Some of it is modeling these little acts of kindness — holding the door for people, smiling and saying hello to people I know, offering compliments when appropriate. But some of it is also reminding my kids that these things are important. That they can and should say hello to those they know, smile when they speak and spread kindness.

I think that’s what my daughter did this past weekend as we were leaving a restaurant. She’d spotted a teacher on our way in, halfway across the restaurant with a large group. As we were leaving they were too, but she didn’t see her — until we were about to back out of our parking space. Rolling down her window, Paige called out, “Hola, Maestra!” With a smile her Spanish teacher greeted her, asked about her holiday and said farewell, waving to me. It was seconds out of our day, but it was so sweet.

This coffee cake will take more than seconds out of your day to make, but it’s worth it. And if you wanted to share this with some loved ones, that’d be worth it too.

Making the batter is simple. Start by sifting together the dry ingredients. Then combine the butter and sugar in a mixer. Add the eggs. And then the pumpkin puree. For this cake, I used my homemade pumpkin puree but canned will work too. 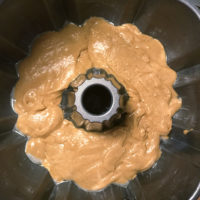 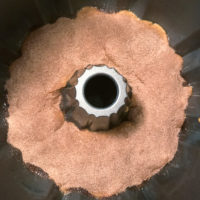 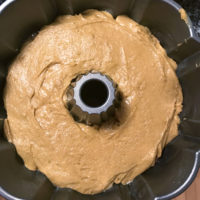 Then bake it. Once it’s done, cool completely before drizzling with icing. And don’t be afraid to spoon the pooled icing (from the plate) on top after it sets?. Why waste it?

Then dig in. Each slice is a wonderful wedge of pumpkin-cinnamon goodness.

And remember, during the holiday season and always, that being kind is the best way to be. It costs nothing and yields so much positivity. Have a wonderful day.

After parent teacher conferences this year we told my oldest that we thought it was great that he was doing so well with his schoolwork, but what we were really proud of was his teacher telling us how kind he was to his classmates.