A comfort food makeover: This recipe for Baked Spaghetti Squash Bolognese is so satisfying, and perfect for cold evenings.

In 1994, my grandmother was diagnosed with breast cancer.

It all happened so fast — the sickness, the mention of the “c” word, the full diagnosis, the surgery, the tests, the chemo, the radiation and the way she changed physically. It wasn’t just the surgery, it was a whole body change. The strong woman who taught me to swim, demonstrated whenever I asked what synchronized swimming was and encouraged me to challenge myself and chase my dreams was hunched over, weak and unable to do the simplest of things. It happened over the course of a few months, but really it felt like overnight.

It was like being swept up in a whirlwind. At 14-years-old, I was naive — or maybe deliberately ignorant — about what the cancer really meant for my family. I didn’t want to believe it was a life sentence. That she’d die and we’d go on without her. That at 14, I would lose my grandmother and by 20, I would forget her voice.

I was angry — angry that it took me so long to realize how serious it was, angry that no one sat me down and leveled with me, angry that I wasn’t seeing the fight I expected from my grandmother, angry that things were rapidly changing, angry that I couldn’t handle it better and then, finally, angry that she died.

It was a dark time for my family.

In retrospect, there are a thousand things I wish I’d done differently, starting with insisting on accompanying her on appointments when I could. If I could go back, I would soak up every second with her, and fight alongside her. I wouldn’t have distanced myself, which I think I did the more sick she became. I would have asked her to tell me all her stories again and again, so I could write them all down. And, most of all, I would have accepted the reality of our situation, and done more to help make the time better.

But I was 14, and though that’s no excuse, and the anger only really masked what I was really feeling: absolute abject terror.

Breast cancer is a killer. It’s a horrible disease that can be fought, but can also rage to a swift end. It scares me — I worry that someday, it will be me who finds a lump in her breast.

All that said, and as important as I believe breast cancer knowledge and research is, I don’t particularly like what October has become. It’s breast cancer awareness month — but instead of focusing on the hard realities, it seems to center on superficial notions instead.

The pink-ifying of October in support of breast cancer awareness seems to me like a dumbing down of reality. Shouldn’t we know by now that breast cancer is a serious illness that can impact women — and men too? Shouldn’t we know, all the time, that self-checks are essential to early detection? Shouldn’t this be an always conversation, not one for October? And most importantly, if we’re going to have a dialogue about breast cancer, shouldn’t it be with more substance?

Warning signs, facts, updates on what’s happening to advance the march toward prevention and a cure. Instead of the superficial lip-service to breast cancer that’s shown through the pink pens, pink ribbons, pink mixers, hats and more, let’s spread facts.

One in eight women will be diagnosed with breast cancer in their lifetime. Aside from my grandmother, one friend, a former colleague and a childhood friend’s mother all have had it — and those are just the women that immediately come to mind. It’s the second leading cause of death in women from cancer (meaning there’s one cancer more fatal to women). Both men and women can be diagnosed with breast cancer, but it’s far more common in women. A woman dies from breast cancer, on average, every 13 minutes. But, if there’s a hope, there are more than 2.8 million breast cancer survivors living in the United States. (Source: National Breast Cancer Foundation)

So what can you do? Though there’s no way to ensure you won’t get cancer, you can take preventive steps to lessen your risk. Among them, according to the respected Mayo Clinic, is eating a healthy diet filled with lots of fruits and vegetables and a low amount of processed meats.

This recipe for Baked Spaghetti Squash Bolognese is a great, healthy way to enjoy a comfort-food favorite. Flour-based pasta is replaced with roasted spaghetti squash, and it’s mixed with a hearty, flavorful meat sauce before being baked with a sprinkling of cheese.

It feels decadent but is really mostly vegetables with a well-portioned amount of ground beef and a little cheese. 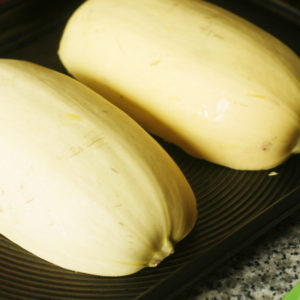 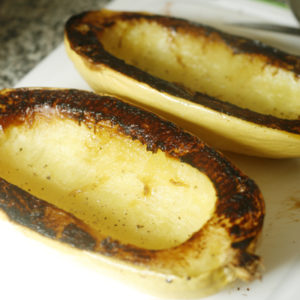 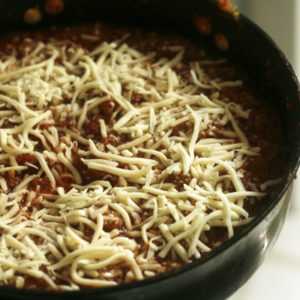 This starts with roasting a spaghetti squash with a little olive oil, salt and pepper. Olive oil is a so-called healthy fat, and recommended in the Mediterranean diet. The Mediterranean diet is supposed to be among the healthiest. While the squash is roasting to a rich, golden brown, you make the sauce — onions, ground beef, garlic, tomatoes, seasonings. Then you mix that roasted squash in, top with a little cheese and then bake to perfection.

This isn’t the fastest recipe you’ll ever make, but it is a satisfying one you can feel good about eating.

I’m not 14 anymore, and I am not naive. Eating healthy alone won’t ensure that I’ll never get cancer, but it is a small step I can take toward giving my body it’s best shot. It’s a step in the right direction, which coupled with regular self-checks helps.

Please don't beat yourself up over being young. At 14 you were a child. Imagine Paige in your situation, what would your expectations be of her? Many of us experience loss at a young age, and we cannot be expected to act with adult sensibilities when we aren't even fully formed.

Thank you, Kate. That means a lot, and is a really good point.

Thank you for sharing your story and this delicious recipe to accompany it.